As a pilot in the US Marine Corps, I flew the MV-22 Osprey and believed my career after the Marine Corps would be related to aviation. However, this was not my true desire. 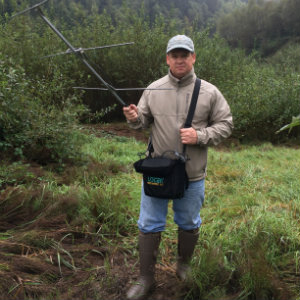 I wanted to work in a natural resources field, but due to my age and limited experience believed my chances were minimal. After returning from deployment in 2009 I decided to research career fields in natural resources and developed an interest in aquatic and fisheries biology, specifically in relation to conservation. Over the next few years, I researched degrees that would allow me to transition to a new career field after the Marine Corps.

At the time there were very few options that would allow someone with a busy life on active duty and a family to work toward a degree in a biological science. When researching degree programs I came across Oregon State University’s Ecampus website. The Fisheries and Wildlife Bachelor of Science degree at OSU fit my requirements. I wanted a degree from a reputable university and the flexibility to adjust to my highly mobile life. In 2011 I decided to enroll in OSU as a post-baccalaureate student in Fisheries and Wildlife Science.

After retiring from the Marine Corps in 2014 I was hired as an intern with the Environmental and Cultural Resources Branch (ECRB) at the US Army Corps of Engineers in Seattle Washington, which also completed my required internship for my degree. While working in ECRB a permanent biologist position opened in the Regulatory Branch. I applied, was hired, and now almost 4-years later continue to work as a biologist in Regulatory.  As a Regulatory biologist, I assess project impacts to waters of the US, applying best available science and regulations to protect aquatic resources, while still allowing reasonable development.

I’m glad I found Oregon State University. Transitioning to a new career takes planning and doesn’t happen overnight. But, OSU’s team of academic advisors and professors in the Fisheries and Wildlife Department were fantastic and helped make my transition a reality. I highly recommend OSU Ecampus for those who want a great education and the flexibility that meets the needs of a working life.