Ameyalli Manon-Ferguson, a Junior in our department, recently received the 2016 Jim and Bonnie Hall Diversity Scholarship. A lifelong Oregonian, Ameyalli also has ties to two very different cultures and places.  Her father’s family comes from Mexico City, while her roots on her mother’s side lie in rural Montana at the edge of Yellowstone National Park.  As such, she has experienced life as part of the third largest metropolis on the planet, and as part of a community of less than fifty people.   She traces the origin of her passion for wildlife and conservation to her early exposure to the marvelous biodiversity in Yellowstone, the opportunity to attend the Jane Goodall Environmental Middle School in Salem, and to the influence of the Native American community’s worldview with its strong emphasis on environmental stewardship.  Through these experiences, she too has come to value “taking care of the Earth, since it takes care of you.“

Ameyalli came to OSU undecided about her future direction, but knowing that she planned a career in research and that our school would be a great choice for any field of science.  She initially considered a major in Zoology, but upon touring Nash Hall, reading the posters, meeting other students, and realizing the potential of a career in conservation biology, she gladly seized on Fisheries and Wildlife as her academic home.

Faced with the high cost of tuition, books and living expenses, it has often been difficult for Ameyalli to make ends meet. She has worked three simultaneous jobs, and has at times dropped classes from her schedule in order to save on tuition. Thus, she plans to devote the scholarship entirely to tuition costs, and is looking forward to the freedom to take whatever classes she wishes next year without worrying about how to pay.  Our Mammalogy and Ichthyology classes top her list of priorities. Given the deep cultural importance of fishes and fishing for many of Oregon’s tribes, and her personal enthusiasm for research on big cats, she views both classes as crucial to her long term goal of working on wildlife conservation in partnership with the Native American community locally and throughout the world.   In so doing, she hopes to help preserve endangered human cultures at the same time that she works to protect the endangered wildlife that such cultures often value deeply.

While working towards her long term goal, Ameyalli still finds time for independent research and volunteerism. She currently assists Maanav Kamath, a graduate student in the Levi lab, in a study of jaguar ecology and conservation in Brazil. She is getting lots of experience tagging videos from camera traps, and hopes to participate in Amazonian fieldwork someday.  Next year she will begin a position at the Eena Haws Longhouse, and she has also been accepted into the College of Agricultural Sciences Leadership Academy.

For recreation, Ameyalli enjoys outdoor activities such as kayaking, hiking, skiing, and rockclimbing.  The last has been a particular passion since she was three, and led her to respond that she’d like to be a mountain goat if she could be transmogrified into any animal in the world.  In a similarly adventuresome spirit, she recently tried indoor skydiving, and hopes to take the training necessary to someday leap from an airplane for real.

To conclude our interview, Ameyalli expressed her sincere gratitude to Jim and Bonnie Hall for establishing this scholarship, and indicated that she hopes one day to set up a scholarship fund of her own in reciprocity.   In so doing, she will pay this gift forward and let other students go to their first choice colleges, or help them avoid dropping out for financial reasons.  Given her achievements to date, I predict that she will be able to help create the bright future that she envisions for herself and others.  We will all be better for it. 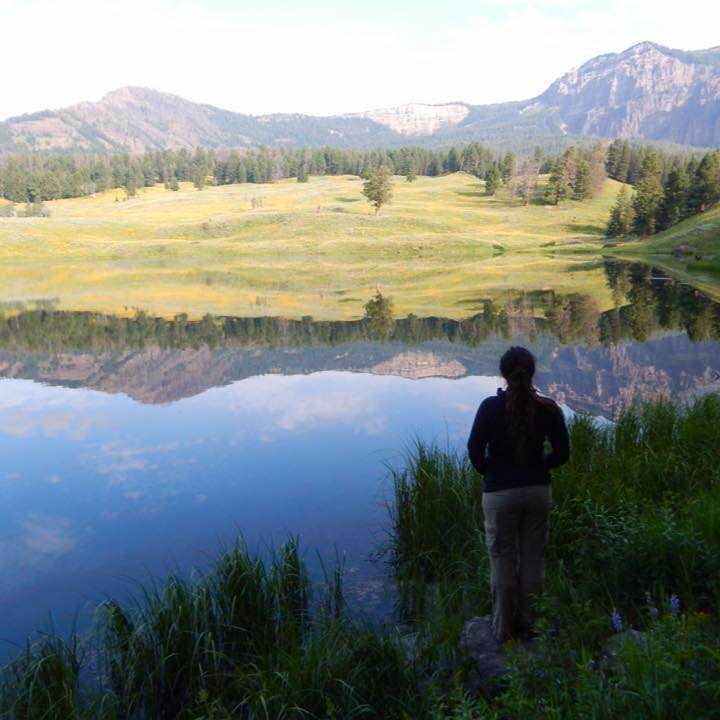 Above: Ameyalli on a recent Trip to Yellowstone.

To contribute to the Jim and Bonnie Hall Scholarship Fund, or any of our other scholarships please visit this page.